Our Financial Performance and KPIs

Monitor our gains and growth through our financial reports below.

NOTE: All amounts expressed in millions, unless otherwise stated.

The Group’s Revenues during the year 2018 grew to Php 88.611 billion, about 99% higher compared to the Php 44.426 billion generated in 2017. This was due to the combined effect of the 49% growth in total volume sold in the same period (2018: 2,747 million liters vs. 2017: 1,844 million liters) and the increase in the domestic selling prices of the products as a result of the 31% increase in the price of Dubai crude (benchmark crude of Asian refineries) average (2018: USD 69.65/ bbl vs. USD 53.14/ bbl) as well as the implementation of the new excise tax rates on the sale of domestic petroleum products. This was augmented by the Php 1.308 billion sales contributed by Philippine Family Mart CVS, Inc. (PFM) and Php 54 million sales contributed by Action Able, Inc.

The 903 million liters incremental sales volume was mainly attributable to the 758 million liters sold by PNX Petroleum Singapore. In addition, volume sold by both the parent company and Phoenix LPG Philippines, Inc. rose by 139 million liters (8%) and 31 million liters (22%), respectively, during the comparative years.

Similarly, Cost of Sales and Services increased by 106%, from Php 37.909 billion in 2017 to Php 78.839 billion in 2018, as a result of the volume growth, aggravated by the higher product costs reflecting the global oil price movements, as well as the imposition of the new excise tax rates on petroleum products starting in January 1, 2018.

Consequently, Gross Margin rose by 58% or Php 3.596 billion. On the other hand, Gross Margin Rate decreased to 12% from the 16% registered in 2017. This was primarily due to the change in the company’s sales volume mix. The volume sold to commercial accounts as well as PNX Singapore sales to external customers grew faster (by 12% and 3877%) than volume sold through the company’s retail outlets where margins are generally higher.

Meanwhile, Selling and Administrative Expenses of Php 5.714 billion, was up by 36% versus the Php 4.134 billion incurred in 2017, primarily because of the cost outlay of the new businesses.

On the other hand, Other Net Non operating Charges of Php 0.656 billion was 970% greater than the Php 0.061 billion incurred in 2017. This year includes Php 0.625 billion fair value gains on Investment Property while previous year’s balance included Php 0.650 billion one- time gain on fair value of acquired asset. However, even excluding this one-time gain, 2018 Net Non-operating Charges still reflected a 80%, mainly due to the rise in borrowing rates as the Bangko Sentral ng Pilipinas (BSP) increased the benchmark rates three times or an equivalent of 1.75% in 2018. Furthermore, additional debt service was incurred due to the acquisition of the new businesses which were funded by short-term debt.

Despite the increases in both operating and non-operating expenses, the net income after tax of Php 2.767 billion, rose by 82% from 2017 re-stated level of Php 1.521 billion.

Meanwhile, the company recorded non recurring transactions, principally as a result of the excess of the fair value over the acquisition cost of the Investment Properties amounting to Php 0.650 billion in 2017. In 2018, the fair value increment of Php 0.625 billion is treated as an addition to the retained earnings net of deferred tax liability.

Considering these adjustments, as well as the Php 0.029 million translation adjustment related to Pnx SG, and the fair value revaluation of land assets amounting to Php 1.220 billion total Comprehensive Income stood at Php 3.568 billion, 134% higher than the Php 1.527 billion restated report in 2017.

The fair value revaluation of land assets was in compliance with Philippine Accounting Standards No. 16, which requires that revaluations be carried out regularly for the entire class of assets to which that asset belongs. Specifically, since the land assets of the PLPI were recorded at fair market even prior to its purchase by the Company, the company opted to similarly reflect the fair value of all its landholdings.

Total resources of the Group as of December 31, 2018 stood at Php 64.660 billion, a 46% growth compared to the Php 44.166 billion level as of December 31, 2017. This was mainly due to the increases in Property, Plant, and Equipment, including the revaluation of the Land Assets and Goodwill, the latter of which was incurred in relation to the acquisition of Philippine Family Mart CVS, Inc. and Action Able, Inc..

Inventories declined by 10% to Php 11.135 billion as of December 31, 2018, from Php 12.416 billion as of December 31, 2017. The build-up in December 2017 was brought about by the confluence of the following factors: to address the new businesses such as LPG with the purchase of Petronas Energy Philippines, Inc. operation of PNX Petroleum Singapore and the volume requirements of the new accounts, higher price of imported petroleum products as a result of movement of prices in the international market, and the decrease in demand for IFO by power companies.

As of December 31, 2018, the Group’s Property and Equipment, net of accumulated depreciation, increased to Php 18.716 billion versus the Php 13.400 billion as of December 31, 2017 (by 40%), representing the assets of the newly acquired subsidiaries, the fair value revaluation of the Land Assets as well as the continuing expansion program of the group.

Interest-bearing Loans and Borrowings, both current and non-current, was up by 42% from Php 28.171 billion as of December 31, 2017 to Php 39.900 billion as of December 31, 2018. The increment of Php 11.729 billion was from the availment of new loans to service the working capital requirements of the new businesses, the bulk of which is by PNX SG, as well as the company’s various capital expenditures.

Total Stockholders’ Equity increased to Php 15.974 billion as of December 31, 2018 from Php 11.684 billion as of December 31, 2017 (by 37%), resulting from the earnings generated and non-recurring gains during the year. This was partly ofset by the declaration of cash dividends for both common and preferred shares. In addition, new stocks were issued in relation to the Company’s Employee Stock Option Plan (ESOP).

The Group’s key performance indicators and relevant ratios and how they are computed are listed below:

These key indicators were chosen to provide management with a measure of the Group’s financial strength (Current Ratio and Debt to Equity) and the Group’s ability to maximize the value of its stockholders’ investment in the Group (Return on Equity, Net Book Value Per Share and Earnings Per Share). Likewise, these ratios are used to compare the Group’s performance with similar companies.

The Company’s key performance indicators and relevant ratios and how they are computed are listed below:

These key indicators were chosen to provide management with a measure of the Group’s financial strength (Current Ratio and Debt to Equity) and the Group’s ability to maximize the value of its stockholders’ investment in the Group (Return on Equity, Net Book Value Per Share and Earnings Per Share). Likewise, these ratios are used to compare the Group’s performance with similar companies.

The rating assigned reflects the following key considerations: upward trend in profitability; the company’s successful equity capital raising activities which supported business expansion; the continuous business expansion in both the retail and commercial/ industrial segments; and the expected improvements in cash flows from operations (CFO) over the long-term.

PhilRatings’ ratings are based on available information and projections at the time that the rating review is on-going. PhilRatings shall continuously monitor developments relating to Phoenix and may change the assigned rating at any time, should circumstances warrant a change. 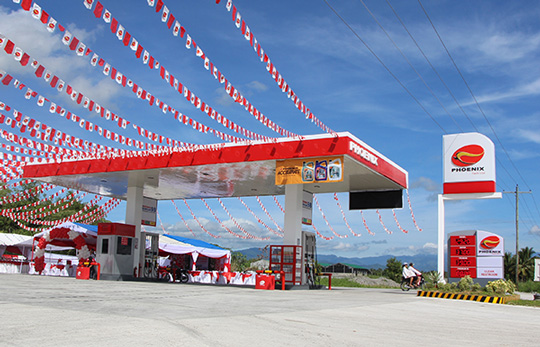 The improvement in the company’s financial performance over the last six years was primarily driven by substantial increases in sales volume of petroleum products and income from fuel service and storage. The aggressive expansion of Phoenix’s retail and distribution network (from 1 in 2005 to 220 in 2011) and it's improved commercial/ industrial customer base supported the increase in sales volume.

The continuous expansion also allowed the company to increase its overall market share from 0.3% in 2009 to 3.6% as of the first half of 2011 (based on data sourced from the Department of Energy). In an industry, however, where the primary means of increasing revenues is through market share gain, the company still faces a great challenge in terms of enhancing its market position. It is still far behind the Big Three- Petron, Shell and Chevron which have well-established distribution networks. Phoenix has performed credibly though relative to the numerous independent market players.

Phoenix listed its shares in the Philippine Stock Exchange in 2007, issuing 29 million shares. Since then, the company has issued additional shares of common and preferred stocks and has received deposits for future stock subscriptions. Proceeds from the equity capital raising activities supported the company’s station roll-out, the expansion of its terminals and depots and the acquisition of property and equipment. The accompanying increase in debt levels, however, offset the higher equity and resulted in a debt to equity ratio of 1.77x in 2011, above the 1.39x ratio registered in 2010.

In the next two years, the company expects to sustain its growth momentum with the continued station roll-out and depot expansion in key trade areas. Correspondingly, cash flows from operations are expected to improve coming from higher income before tax and the slower rate of increase in receivables and inventory levels. In the last six years, a big portion of the company’s resources was tied up in receivables and inventory due to the aggressive expansion, as well as increasing oil prices. This has resulted in negative cash flows from operations in some years. The company needed to raise additional capital- both equity and debt to finance it's operating and investing activities.

PhilRatings also took into consideration external factors which affect the performance of the oil industry but are beyond the company’s control. These expose the company to industry-wide risks. Given the company’s relatively short corporate history, it has yet to consistently demonstrate its capability to weather and handle unforeseen circumstances and developments which may significantly affect its operations and business. This, however, is party mitigated by the fact that members of Phoenix’s management team have an average of 18 years of experience in the oil industry.

Phoenix Petroleum has a credit rating of PRSAa, given by the Philippine Rating & Services Corporation

For inquiries from analysts, the financial community, and institutional investors, contact Phoenix Petroleum Philippines, Inc. through:

Or you may also send us an email at info@phoenixfuels.ph

Any cookies that may not be particularly necessary for the website to function and is used specifically to collect user personal data via analytics, ads, other embedded contents are termed as non-necessary cookies. It is mandatory to procure user consent prior to running these cookies on your website.