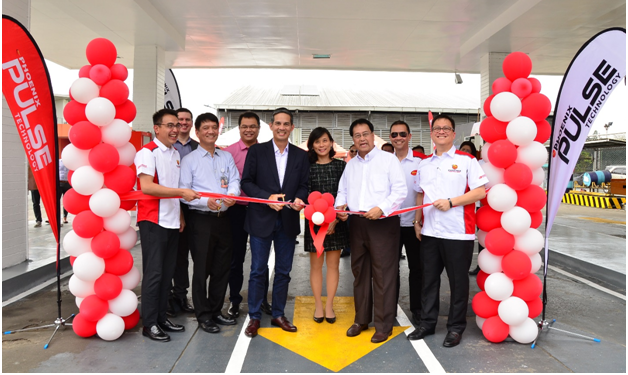 Phoenix Petroleum and Meralco mark the companies’ partnership with an inauguration at the Meralco Center in Pasig City on April 2, 2018.

Phoenix was recently awarded the contract to supply to the 11 fuel stations of Meralco. The oil company will also provide the Phoenix PULSE Technology as a complementary product for the deal, making Meralco the company’s first commercial client to be served such. Phoenix PULSE Technology is a newly-launched fuel additive that has cleaning and protection properties for enhanced power and acceleration.

“We thank Meralco for giving us the honor and the privilege to be their partner. We truly value this business and we are here to stay,” Phoenix Chief Operating Officer Henry Albert Fadullon said during the launch of the partnership on April 2, 2018 at the Meralco Centerin Ortigas, Pasig City. During the event, the pumps at the Ortigas fuel station,redesigned with the Phoenix brand, were unveiled.

According to Meralco, they arelooking for partners who share their Corporate values, especially of being Makabayan and having Malasakit. Theirvision is to remain as the power service provider of choice, and they can achieve that with the help of partners like Phoenix thatcan help them deliver the best service to their customers.

Phoenix Petroleum is among the country’s top three provider of fuel to a wide range of commercial and industrial businesses in power, marine, manufacturing, transportation, aviation, and other industries. It is the leading independent oil company and is engaged in the trading and marketing refined oil products, including liquefied petroleum gas (LPG) and lubricants; operating depots and storage facilities; hauling and into-plane services; and trading and supply. Earlier this year, it expanded its business into convenience retailing after acquiring Philippine FamilyMart, and to asphalt manufacturing, marketing, and distribution through Phoenix Asphalt Philippines Inc.

Meralco, now on it’s 115th year, is the largest private sector electric distribution utility company in the Philippines covering 36 cities and 75 municipalities, including Metro Manila. It serves 6.3 million customers that includes the core of the country’s industrial, commercial, and population centers.