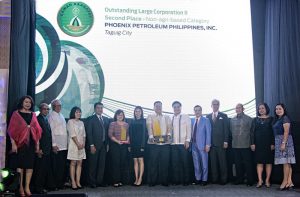 To determine this year’s winners, the panel of experts and judges from LANDBANK went around the country and performed stringent measures of validation. They visited Phoenix Petroleum’s terminal in Davao City, the company’s first depot.

The Gawad Korporasyon KAagapay sa Ating GAnap na tagumPAY (GAWAD KAAGAPAY) was launched by the Land Bank of the Philippines as a fitting accolade for its clients who have been strong partners of the bank and have been providing their significant share in community development.