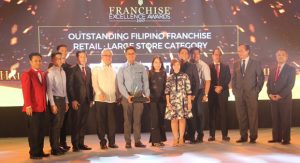 Phoenix Petroleum wins the Outstanding Filipino Franchise in Retail-Large Store Category in the 2017 Franchise Excellence Awards. Receiving the award for the company are Phoenix Petroleum AVP for Sales Mega Manila Ericson Inocencio (6th from left) and AVP for Brand and Marketing Celina Matias (7th from left) during the awards held at the SMX Convention Center, SM Mall of Asia, Pasay City on July 19, 2017.

Phoenix Petroleum was named Outstanding Filipino Franchise in Retail-Large Store Category in the 2017 Franchise Excellence Awards (FEA), the second time for the company to receive the prestigious award.

The awarding was held on July 19, 2017 at the SMX Convention Center, SM Mall of Asia, Pasay City.

FEA nominees are judged based on a comprehensive set of criteria, which include the growth performance indicators in expansion, sales and profitability, franchise, sales and marketing programs, excellent operation system, innovations implemented, corporate social responsibility, and ethical practices and reputation.

The company received its first Outstanding Filipino Franchise award in 2015, where it was noted for being a successful and fast-growing homegrown company in an industry dominated by major players, serving as an inspiration to provincial brands.

Phoenix Petroleum’s second win in the FEA places it in the awards’ Hall of Fame, given to businesses which win twice in the same award category.

“We continue to be committed to delivering world-class products and services and the best customer experience, as we aspire to be an indispensable partner of Filipinos in their journeys,” said Phoenix Petroleum Chief Operating Officer Henry Albert Fadullon.

From its first five stations in Mindanao in 2005, Phoenix Petroleum now has more than 500 stations nationwide and is the leading independent and fastest-growing oil company in the Philippines.

Phoenix Petroleum recently marked its 10th Listing Anniversary at the Philippine Stock Exchange on July 11, 2017 as the first Davao-based company to list, and the first oil company to list after the passage of the Oil Deregulation Law in 1998.